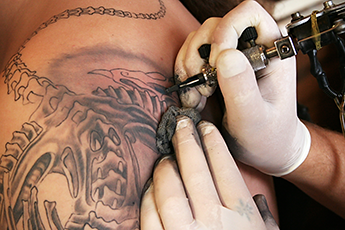 As a pastor, I get asked about tattoos fairly often, so I thought that I’d write up a basic outline of my thoughts.  Clearly tattoos are very popular in our culture and there are Christians on both sides of the topic, some who say that it is fine for Christians to have them and others who say that it is bad.

Let me begin by saying that I do not think that it is good for Christians to get tattoos. If you already have a tattoo, it won’t send you to hell or anything, but I do think that they will cause spiritual difficulties for those who have them.  For those who are thinking about getting one, I would recommend against one.

The pattern that I see in the Bible is that body markings are a sign of belonging, either temporary or permanent, to what the mark represents.  (At the bottom of this post I describe why I believe body markings such as tattoos are a sign of belonging to something.)  Sometimes the belonging is to a dead person, sometimes it is a dragon, sometimes it is a remembrance of some shared time with another person.

Here then are two questions to consider:

1. Belonging:  The image in the tattoo represents the object to which a person with the tattoo is belonging. When it comes to belonging, it is clear that there are many images that would be a bad idea for a believer in Jesus to belong to: dragons, snakes, skulls, sexual imagery etc.  Clearly these are depicting things that could be spiritually harmful for a Christian to belong to (dragons, snakes = symbol for Satan – Rev 12:9; skulls = symbol of death – the enemy that Jesus, the author of life defeated – 1 Cor 15:26; sexual imagery = lust=adultery Matt 5:28).

But what about a flower, or better yet a cross?  If you believe that Jesus is asking you to get a cross symbol, then out of obedience and belonging to him, then I would say to obey Jesus.  If you are just doing it on your own, I would recommend against it because then it is really more of a belonging to yourself than to God. So far I haven’t met anyone who God has spoken to and told them to get a tattoo, it has always been their own desire.

2. Is it honoring to God? 1 Corinthians 6:19-20 NIV – Do you not know that your bodies are temples of the Holy Spirit, who is in you, whom you have received from God? You are not your own; you were bought at a price. Therefore honor God with your bodies.

The first point is that our physical bodies are temples, dwelling places, of the Holy Spirit – God the Holy Spirit – who lives inside of those who have surrendered their lives to Jesus.  The implication here is that our bodies are special and important.  Some would say that all that matters is our spirit and/or soul, but Paul here presents the importance and honor of our physical bodies.

Secondly, he says that if we are a follower of Jesus, our bodies and all of us, do not belong to us.  We were purchased by Jesus as he gave his life for us on the cross.  Our bodies are often thought of as “ours” and perhaps the only thing that is truly ours.  But for believers, this is something that we are called to surrender to Jesus.

What is the difference between graffiti and a mural/artwork?  Permission of the owner of the building or structure.  So if we are getting a tattoo without God telling us to do so, we are basically putting graffiti on God’s house.

There are other concerns that I have about tattoos (their permanence, why are they addicting?), but for now I would simply summarize by saying that because of the belonging, either to unholy items or simply to ourselves, I believe that tattoos will create spiritual problems for those who get them.  As a believer we are called to honor God above ourselves and unless God is specifically telling you to get a tattoo, then we are not honoring him, but rather putting graffiti on his house.

Leviticus 19:28 says “Do not cut your bodies for the dead or put tattoo marks on yourselves. I am the Lord.”

Those who believe tattoos are OK point out that 1) this is in the Old Testament and 2) the verse before this says “Do not cut the hair at the sides of your head or clip off the edges of your beard.” and verse 19 says “Do not wear clothing woven of two kinds of material.” And these are clearly prohibitions that we don’t believe applies to us.

These statements are correct, but of course, being in the Old Testament doesn’t mean that it isn’t a way of God that we should still pay attention to and verse 13 says “Do not defraud or rob your neighbor.” which we would say is still true for a Christian and certainly a good example of “All the Law and the Prophets hang on these two commandments” Matthew 22:40.

How then do we know which of these still apply and which ones don’t.  There are several principles that we should apply in answering: 1) Did Jesus or the New Testament either say it is something that still applies or not?  2) What is the context and are there other Scriptural references or principles relating to the topic?

While there aren’t any direct references in the New Testament to tattoos, there is a principle I referenced earlier from 1 Corinthians 6:19-20 “Do you not know that your bodies are temples of the Holy Spirit, who is in you, whom you have received from God? You are not your own; 20 you were bought at a price. Therefore honor God with your bodies.”  So there is a need to honor God with our bodies and I described above how getting a tattoo without God’s instruction is not honoring him.

2) Context and Other Scriptural References?

In the context of Leviticus it says “Do not cut your bodies for the dead or put tattoo marks on yourselves.  I am the Lord.”  So there is a connection to cutting or marking of the body, and doing so for the dead.  In Leviticus 21:5 priests are given this command when someone dies: “Priests must not shave their heads or shave off the edges of their beards or cut their bodies.” So again the cutting of the body is associated with the dead as is the shaving of the edges of the beards which is also mentioned in Leviticus 19.  So it appears that the context of the tattoo is about dead people – a permanent mark to remember a dead person.  Certainly this is one reason people get tattoos today.

There are other things in the Bible that relate to permanent body markings: piercing an ear – done to a slave who wishes to become a permanent slave (Ex 21:6).  It appears that this is a mark of belonging.  Interestingly in Ezekiel 9:4 people are marked as belonging to God and thus spared.  In the book of Revelation (verses 14:9-10 and others), persons who received a mark of the beast on their hands or foreheads where associated with the beast and would receive the judgement of God that the beast receives.

The pattern that I see in the Bible is that these body markings are a sign of belonging, either temporary or permanent, to what the mark represents (a dead person, a master, God or the beast).